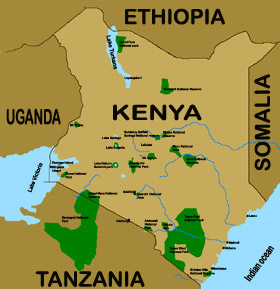 Kenya is an independent republic, occupying an area of 582,646 km2 (roughly the size of France). The population of the country is approximately 30 million with over 40 ethnic groups. The National language is Kiswahili and English is the official language spoken at all levels.

The capital city is Nairobi and Mombasa is the main port. Kenya straddles the equator and is bisected by the Great Rift Valley from North to South.

The diverse and abundant wildlife owes it very existence and uniqueness to the country's terrain, which ranges from snow covered peaks of Mount Kenya, to Highlands, to Savannah, to the Great Rift Valley and its lakes as well as the simmering sands of the Coast. Each of these regions are home to unique types of wildlife. For ornithologists it has an amazing wealth of birdlife. Kenya has 59 National Parks, Game Reserve, Marine National Parks and Reserves.

The proper management of the game parks is the hallmark of the country's conservation measures and commitment to eco-tourism as dramatically illustrated by the ivory burning in 1989 by President Daniel Arap Moi. Since then, the great fire has been lit twice more to banish confiscated stocks of poached rhino horn and ivory. Kenya is a land where the world's remaining population of big cats, big mammals and plains game still roam free in their natural habitats.
National Parks & Areas Of Interest